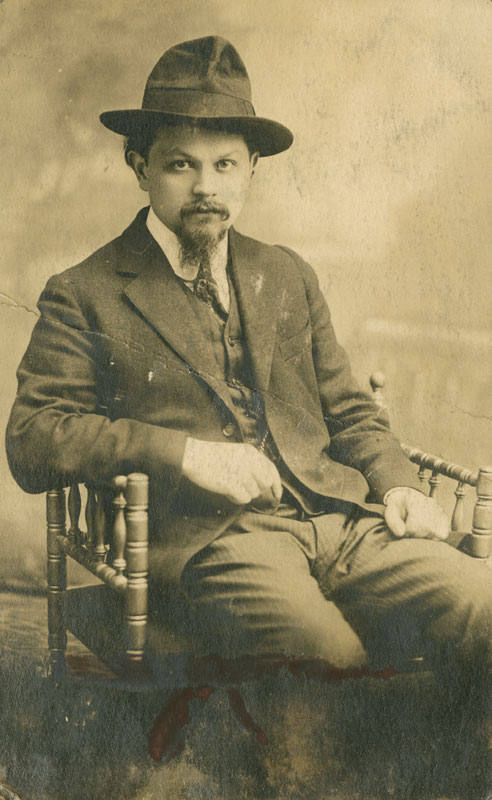 Americana Cover: Printed and in Manuscript, 1947, Courtesy of McCain Library & Archives, The University of Southern Mississippi. 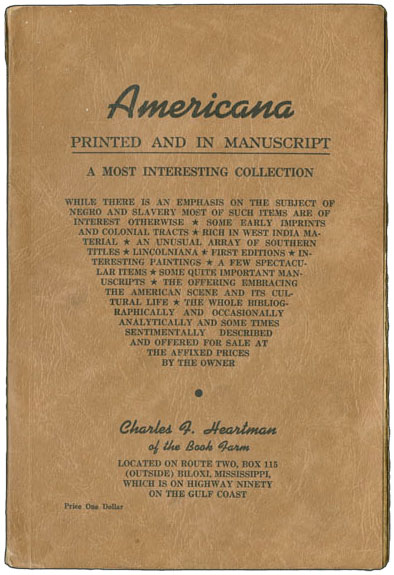 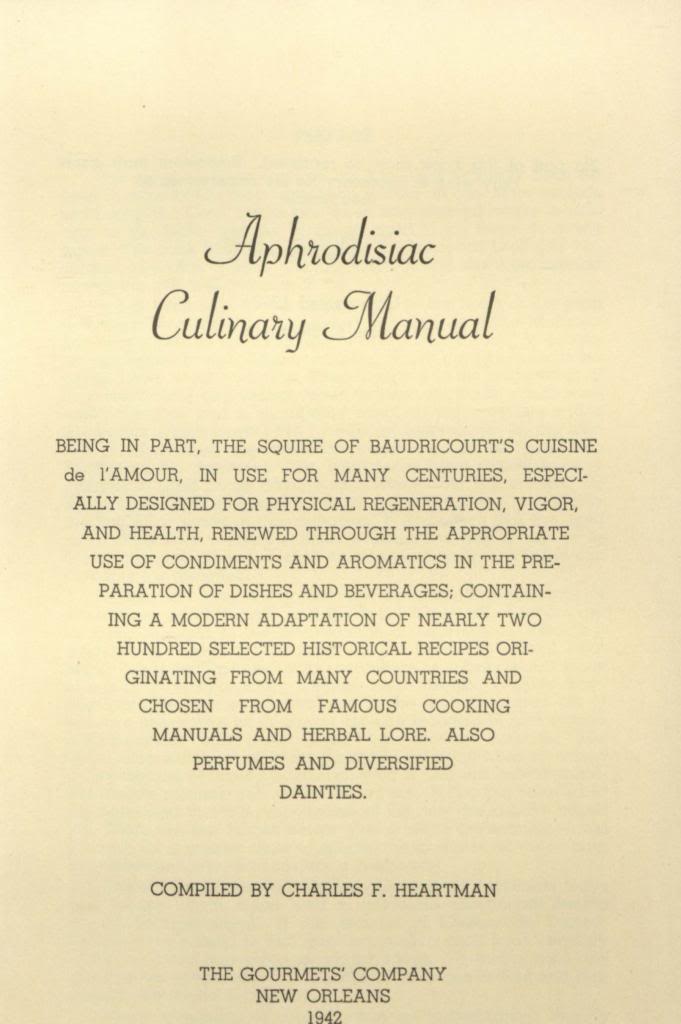 Charles Frederick Heartman was born on April 4, 1883, in Braunschweig, Germany. His father was Charles Henry Frederick Peter Heartman, a furniture dealer. After the untimely death of his mother, at the age of two he was raised by his father and grandmother.

Heartman began collecting books and prints as a child, and at the age of seventeen he produced a literary periodical entitled "Der Literat." Keeping up with his habit, he continued to write for numerous German newspapers and periodicals, and at one time was a foreign correspondent in the Balkans. By 1907 he owned and edited a small newspaper called Der Berliner Beobachter. That same year, convinced that Germany was in a moral, physical, and intellectual decline, he emigrated to London, England. There he continued his journalistic career and made preliminary inroads into the bookselling business.

While in London he met Martha Charlotte Frieda Esche, another German emigre, and they married the following year. They remained in England until 1911, when they emigrated to the United States with only the $40.00 in cash required of all immigrants.

While in New York Charles was hired as a society reporter for The New York Herald, but was fired when it was discovered that he was married (marriage was apparently considered a liability for that position), being forced to accept a job as janitor of an apartment building. Eventually, Heartman was fired because he was more successful at renting apartments than was the building superintendent.

In his spare time, he worked as a volunteer for a book dealer named Deutschberger, learning everything he could about the book trade. In 1913 he held his first book auction, and his career was launched. He established book stores at two locations in New York, first on Lexington Avenue and later on East 24th Street. In 1920 Heartman decided that his book business might prosper in other areas of New England. In search of the perfect location, he moved to Rutland, Vermont. Then in 1921, he moved to Perth Amboy, New Jersey, finally settling in Metuchen, New Jersey in 1922. There he purchased a Greek Revival mansion and conducted retail sales and auctions of rare books and manuscripts from his home. His auction sales were elaborate, well planned events, and frequently included sumptuous meals prepared by Mrs. Heartman. The Heartmans remained in Metuchen for thirteen years.

In 1935, Heartman moved to New Orleans and with his associate Charles Knight, established The Pelican Galleries in the French Quarter. In 1936, he purchased a 400-acre farm from the United States Government, approximately six miles south of Hattiesburg, Mississippi, which he named The Book Farm. His original intent was to establish a cooperative colony for artistic and literary individuals on the estate. However, the venture proved economically unfeasible, so he returned to selling books and conducting auctions. In this rural setting, the Heartmans frequently held outdoor barbecues for auction patrons and guests. The Heartmans remained in Hattiesburg until 1943, when they relocated to Biloxi, Mississippi. The Biloxi establishment was also called The Book Farm.

In 1947 Heartman moved to New Braunfels, Texas where he conducted business from his two-story stucco home on Seguin Street. In 1951 he returned to New Orleans, where he established The Southern Library Service. He remained in New Orleans until his death in 1953.

Throughout his career, Charles Heartman scoured book stores, auctions, and estate sales, searching for rare books and manuscripts. He specialized in rare Americana, which is considered his most important contribution to the literary world. One of his strongest legacies is in the field of Afro-Americana and two significant collections of Heartman's Afro-Americana exist; One is here at Xavier University in New Orleans; the other is at Texas Southern University in Houston, and is perhaps the largest such collection in the United States.

Heartman founded the 78 volume "Heartman's Historical Series", consisting of bibliographies, reprints of rare books relating to America, checklists of authors' works, and original productions. He also wrote a number of books, using such pseudonyms as Stefan Stumpf, Steven Stump, and Heinrich Hartman. Among his published works are Maria Hedwig (written in 1907 about his first love), Cuisine de l'Amour, and A Bibliographical Checklist of the First Editions of Edgar Allan Poe, Vols. I - III. In addition, he edited and published two book collecting journals, The American Collector (which was later re-named The Americana Collector) and The American Book Collector, and wrote pamphlets on a variety of topics. Among his pamphlets are several stinging criticisms of his native Germany during World Wars I and II. An example is "There Must Be No Germany After This War", published in 1943.

Mr. Heartman was a member of the National Republican Club, the Edgar Allan Poe Club, the Knights of Pythias, the Benevolent and Protective Order of the Elks, and several book clubs and state historical societies.

Charles F. Heartman died of a heart attack on May 8, 1953, at his home in New Orleans, just three days after attending a meeting of the National Society of Autograph Collectors in Columbus, Ohio. His remains were cremated.

After her husband's death, Martha Heartman continued to operate his bookselling business until 1963, but conducted no auctions. Mrs. Heartman died on October 26, 1969, in New Orleans, at the age of 88.

Charles Heartman has been described as brilliant, stimulating, salty, and colorful. However, more insight is contained in the fact that one of the most gratifying events of his life was becoming a naturalized American citizen on September 12, 1916. In his own words, "The most glorious moment of my life was when the postman handed me that long white envelope that I knew contained my naturalization papers." 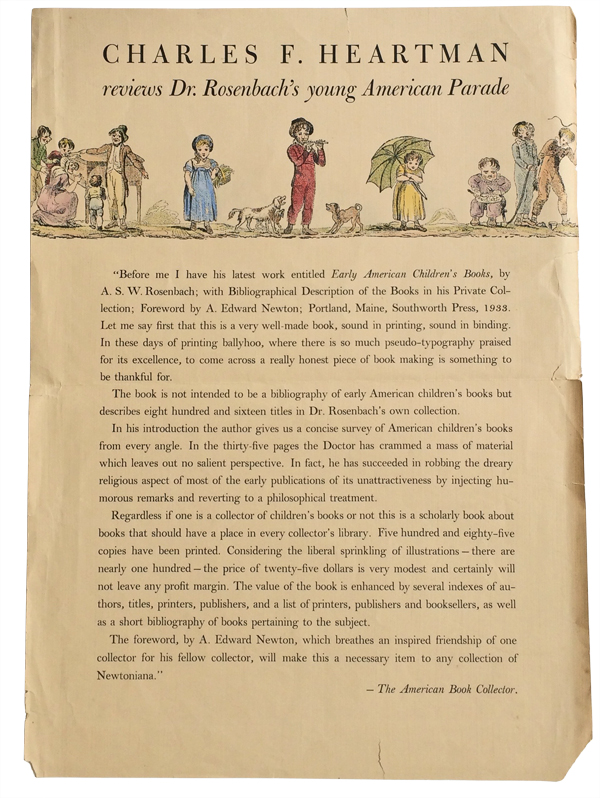 The New England Primer Issue Prior to 1830, Charles F. Heartman. 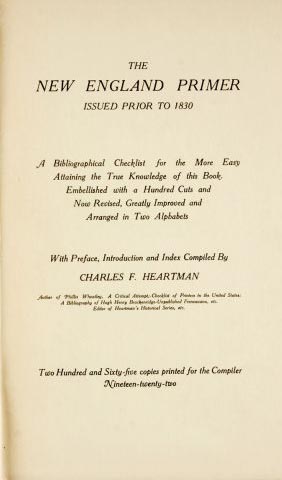 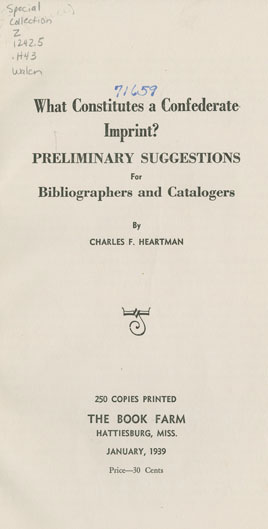